Get Your Free JPY Forecast

The Japanese Yen weakened over 2 percent in the aftermath of January’s Bank of Japan monetary policy announcement. If losses are sustained, this will end up being the best single-day performance for USD/JPY since March 2020. Let us take a closer look at what happened here.

Well as it turns out, nothing much at all. The BoJ left all policy settings unchanged this month. This includes the policy balance rate (maintained at -0.1%) and the 10-year bond yield target of about 0%. Policymakers also mentioned that they would keep on with bond purchases with a degree of flexibility. That underscored the central bank’s intention to continue with yield curve control as planned.

To understand why the Yen swiftly weakened here, you need to go back to what happened in December. Last month, the central bank shocked markets by widening the yield curve band around 0% to plus/minus 50 basis points. That was from +/- 25bps. The central bank also increased asset purchases to JPY9 trillion each month from 7.3 trillion prior.

How to Trade USD/JPY

Markets viewed this as the central bank taking steps closer toward policy normalization. Skipping forward to last week, a story from Yomiuri Shimbun increased speculation that the central bank could take further steps toward policy tightening. As such, traders were heavily skewed towards some further adjustment today. When that did not happen, those bets were unwound.

So, where to for USD/JPY? Well, the currency seems vulnerable in the near term as markets will likely continue unwinding less-dovish bets that have been building up for the past few weeks. As it stands, the BoJ remains very dovish compared to its major peers. As such, the focus will shift to external factors ahead.

Over the remaining 24 hours, United State retail sales, PPI and industrial production could offer further clues about the health of the economy. Softer figures could see markets continue focusing on a Fed pivot. That may help USD/JPY come down slightly.

Market Reaction to Bank of Japan

USD/JPY has bounced off the 100% Fibonacci extension level at 127.98 following the Bank of Japan. This follows persistent positive RSI divergence, which was already showing downside momentum fading. That is leaving the pair facing the former 130.39 – 131.73 support zone. The latter may now hold as new resistance. Keep a close eye on the falling trendline from October, which could maintain the downside bias. Otherwise, extending gains places the focus on the 50-day Simple Moving Average (SMA).

Receive timely and compelling market commentary from the DailyFX team 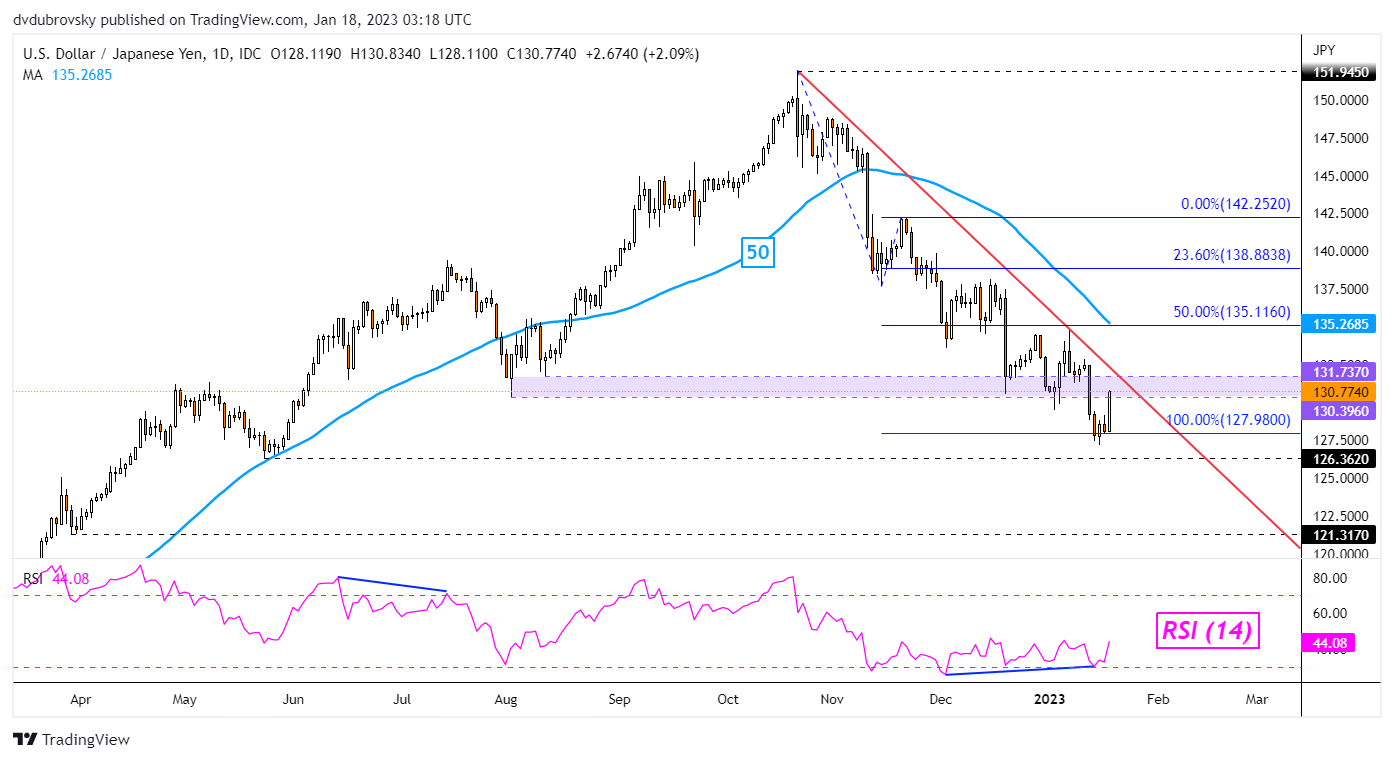